Home » Blog » My route to becoming an indexer

My route to becoming an indexer 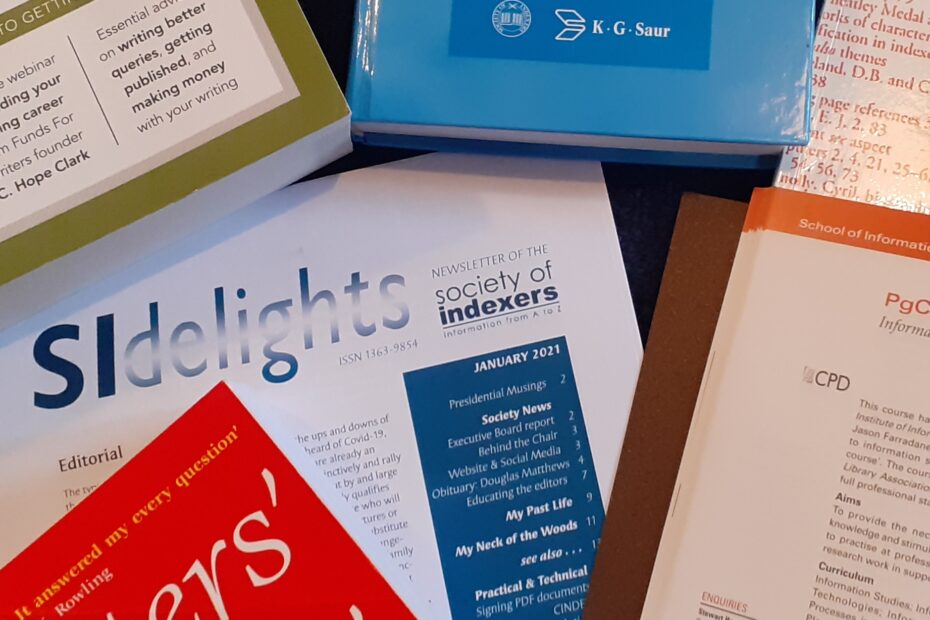 Most indexers start their indexing careers after following other professional pathways first, so the Society of Indexers’ newsletter SIdelights has a regular column called “My Past Life.” In the most recent issue, I was asked to write about my route to indexing and I have adapted that article here. (Alternatively click ‘About’ for brief introduction to my indexing business.)

My very first job was as a Saturday Library Assistant in a public library while I was still in the sixth form, then I studied English and Contemporary Cultural Studies before completing a Graduate Traineeship in an academic library and an MSc in Information Analysis.

My MSc research project involved my first use of the type of thematic analysis that is used in indexing. I conducted a set of focus groups sessions where I asked members of local patient support groups to discuss health information in leaflets and on websites. I recorded and transcribed the discussions and then coded them thematically to find the ways in which they had defined quality. Only after starting my indexing training years later did I see the connection between qualitative data analysis and indexing, which also involves closely reading a text to identify and label the concepts within.

Through the qualitative analysis I identified fifteen quality indicators with the two most important being organisational authority (who had written or published the leaflet or website) and the use of plain language. The participants did not find many of indicators of evidence-based information such as date of publication and lists of references, which were being promoted by projects such as DISCERN at that time[1]. They demonstrated a lack of confidence in their ability to select quality health information and relied on pre-selection by authoritative sources such as libraries, support groups, and health professionals. They also expressed a high level of distrust of the internet[2].

After having a career break to start a family and working as an administrator for a local playgroup (pre-school/nursery), I took a job as a Management System Technical Author in an energy company. All oil operating companies have a management system containing documents that cover the policies and procedures that control their operations.  Many of these documents are legally required by the Health and Safety Executive. In a team of five technical authors, I worked with the technical and engineering experts to create new documents and to process updates of existing documents using controlled terminology and set formats. My training included a course on applying Human Factors (Ergonomics) to procedural documents that showed how safety can be affected by word choice, layout and procedural structure.

Some of the documents were more interesting than others; I once spent a week writing about different types of bin. I wondered why the document was called the Garbage Management Procedure rather than the Rubbish Management Procedure and learned that the American-sounding term ‘garbage’ was taken from the relevant international marine convention. I felt that either choice sounded like a bad review.

The dry nature of the document subject matter was sometimes alleviated by unintentional typos, for example ‘gas leeks’, while other interesting mental images were created by some of the industry-specific terminology such as ‘Christmas tree’, which is the name for a wellhead flow control system because it has lots of branches sticking out. My favourite set of terms involved pigs, pig launchers and pigging runs. The acronym ‘PIG’ expands to Pipeline Inspection Gauge, and it is rumoured that this is a backronym, named for the squealing sound made by early cleaning pigs when they were sent down the pipes.

While working as a Technical Author, I completed the SfEP-approved Basic Proofreading distance learning module through the Publishing Training Centre in my spare time. Then I found an article about indexing in an old copy of the Writers and Artists Yearbook from 2006. After reading more on the Society of Indexers’ website and trying the pre-enrolment exercise, I signed up for the training course. The final step to moving from my past life to my present indexing life came when I passed my final assessment (an index of a full book) and received my accreditation notification, followed by a first commission a few weeks later.  Since then, commissions have been coming through regularly and I’m gradually specialising in Christian theology/religious books, alongside the occasional technical book and some literary/cultural studies texts.